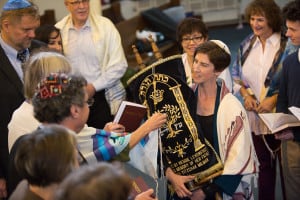 This past month has been nothing short of Torahpalloozah! I can’t think of a better word to describe the range of ways that Torah has taken a central role in exciting and engaging Jewish life in this fair city of ours in the past few weeks. Many Jews who haven’t engaged with Torah as adults, with adult questions and sophisticated tools for interpreting and reflecting on it, tend to think of Torah in pediatric terms – as an outdated list of rules by an guilt-injecting Old ManGod and a series of children’s stories. These few scenes might give a different picture of contexts for Torahwisdom, Torahinquiry, and Torahinspiration.

Act I ~ On Shabbat May 24th, we celebrated our DJC b’nai mitzvah class being called to the Torah. For the first time, each of the students chanted verses from the Torah scroll, from a text overflowing with stories, laws, images, and questions that have been passed me’dor le’dor, from one generation to the next, in a chain originating in desert dust, wandering and deep existential seeking, and extending through history and geography to this very day. The same text. The same basic ritual. The same passing down from elders, to be received into the hands of the next generation.

At the same time, unlike the all-male b’nai mitzvah of a hundred years ago, this group of students consisted of girls and boys, both with equal access to Jewish learning and equal importance in their new role as conscious and responsible Jewish adults. From now on, both the girls and the boys can be counted in a shiva minyan to support a mourner saying kaddish. Both the girls and the boys can now chant from the Torah on any Shabbat or holyday (with enough preparation).

And unlike the b’nai mitzvah of a hundred years ago, this group of students are the children of inter-religious and inter-cultural, as well as Jewish-Jewish, parents. One of the students is the grandchild of Holocaust survivors. These students have been raised by one parent, two parents, two parents in two different homes and extended family. They have been nurtured by heterosexual and same-sex parents. They have been brought to Jewish learning by parents whose Jewish background, knowledge, and involvement is wide-ranging, from novice to seasoned. And for many parents, traveling with their children through this learning process, their own relationship with Torah, ritual, and Jewish learning has opened in new ways.

We are living in unprecedented times!

Act II ~ Over the weekend of May 29th – June 1st, Toronto was home to the first-ever conference of sofrot, women Torah scribes. It was a conference of seven women. Perhaps not large enough to make it onto the front page (or even the back page) of the Globe and Mail, but groundbreaking nonetheless. City Shul had commissioned five sofrot to scribe a sefer Torah (Torah scroll), each woman scribing one of the five books. Over the weekend, the scribed segments of parchment were sewn together and the scroll was paraded through the streets of downtown Toronto and into its new home at the Wolfond Centre.

For generations, every Torah scroll has been entirely scribed by hand, with a quill and ink, on parchment. There cannot be a single error in a Torah scroll. For generations, every Torah, every Purim megillah and set of tefillin, every mezuzah marking our doorposts, has been scribed by men. Each letter is crafted to specification and many letters are adorned with crowns. Our sages teach that the letters of the Torah are black fire written on white fire. In an age of Kobos and e-readers, scribing is truly a fine art that keeps us connected to the beauty of words and letters, and the beauty of the communal practice of chanting those hand-scribed words and interpreting their layered meanings.

Three of the sofrot involved in the Torah project live in Israel and two in North America. One of the women grew up in the former Soviet Union, with little to no connection to Judaism. Upon moving to Israel, her exploration of Judaism led her to fall in love with its learning and living, to eventually study to become a rabbi, a soferet, and a chaplain. One woman is currently in rabbinical school. One is a visual artist in the process of curating artists worldwide to create an all-visual Torah – one richly-rendered image for each Torah portion. One is teaching and mentoring sofrot, often over Skype,as they gradually emerge all over the world. One is in love with Hebrew letters and language – she spent a year baking challah in shapes and scenes inspired by the weekly Torah portion, and is now writing a book about her experiences at the San Francisco Jewish Museum where she was on live display scribing a Torah scroll.

We live in unprecedented times!

Act III ~ On Saturday, May 31st, 25 people gathered at the home of DJC member Sheri Cohen, dressed in white for a program, nay, a holistic experience, entitled Adorning the Bride – A Mystical Preparation for Shavuot. Shavuot is celebrated as the festival at the foot of Mount Sinai, the powerful experience of revelation and the giving of the Torah (made popular by Charlton Heston). Jewish mysticism relates to Shavuot as the wedding between God and the Jewish people, an ecstatic falling in love and committing to one another, with the Torah as our ketubah (marriage document). The Zohar (Jewish mysticism’s core text from the 13th century) teaches that receiving Torah is an act of union with the Divine. Through our weaving together words of Torah and the mystical intentions we bring to preparing our minds and hearts, we adorn the Bride, the Divine feminine, dressing Her in radiance to unite with the King, the Divine masculine. At the same time, we, the community, become the Bride, adorned to unite with the Holy One.

During the evening, henna artist, Noam Sienna adorned the hands and arms of participants with intricate henna roses. As Noam taught, it has been a long-standing custom among Jews of Afghanistan and in nearby countries to adorn children with henna on Shavuot and invite them to lick Hebrew letters written in honey, celebrating the beginning of their Torah learning with the letters sweet in their mouths.

Ancient traditions. New integrations. We do not live in such unique times. And we live in unprecedented times!

Act IV ~ And finally (but certainly not an end to the chain), we celebrated the festival of Shavuot on June 3rd and 4th beginning with a Tikkun Leil Shavuot, all-night learning. It is a practice developed by the circle of 16th century Kabbalists to ensure they were not only awake for revelation in the morning, but to shake their habitual perceptions and enable them to wake up their hearts, minds, and souls in readiness to receive the depth of Torah and the revelation of God’s very presence, palpable at the trembling foot of the mountain. Downtown Toronto Jewish communities gathered at the MNJCC for learning with rabbis, academics, artists, and educators with over forty different sessions running throughout the night on topics that ranged from explorations of classical Jewish texts to theological inquiry into what post-monotheistic Judaism might be; from Jewish Goddess chanting to Torah improv. Several DJC members were there, representing proudly, though maybe next year we can build our numbers. The evening opened with a multi-disciplinary cabaret illustrating different ways of connecting to Torah. A spoken word artist imagined being God’s roommate. A theatre artist shared a one-woman piece on teaching Torah in a strip club. A rabbi and youth choir shared an uplifting original song about Torah’s unifying power. A feminist activist connected Torah and her work for pay equity legislation.

The departure point of Torah is the same. The creative directions it explored were vibrant streams flowing outward into ethics, spiritual innovation, human relationships, disputation and inspiration.

All in all, times have not changed that much. And we are living in unprecedented times.

What’s your next step, your next curiosity, in engaging with Torah? Where will Torah take you?