I was given a beautiful opportunity this past winter. I was commissioned to compose a piece of music for Truah, a new Jewish social justice organization based in NY. Their mission is to bring a Jewish moral voice to the most pressing human rights concerns we face today – ending human trafficking in North America, creating fair working conditions in the tomato fields, building a better future for Israelis and Palestinians, preventing the eviction of tens of thousands of Bedouin families from their homes in the Negev, and more. Their work is truly powerful.

They wanted a song that would express a rootedness in Jewish values and stood as a clarion call to action. Quite a formidable task, and a deeply inspiring one. So I chose to work with two verses from Psalm 89 that are traditionally chanted on Rosh Hashana, right after we blow the shofar. Those who want to hear the song, be sure to come to Neilah at the end of Yom Kippur and you’ll hear it before our final shofar blast.

The verses read: Ashrei ha’am yod’ei tru’ah – Happy is the nation that knows the sound of the tru’ah (the shofar blast); Adonai be’or panecha ye’halechun – Holy One, they walk in the light of Your presence.

What does this mean? Ashrei ha’am yod’ei truah – Happy is the nation that kno 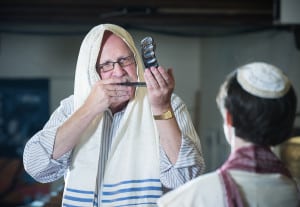 ws the sound of the tru’ah. According to this verse, there is a connection between knowing the ba-ba-ba-ba – the nine quick short blasts of the shofar’s truah, and feeling joy. In other words, if there’s no truah, there’s no joy, but if you know truah, you know joy.

And the verse tells us that those who know this tru’ah, have the experience of walking in the presence of divine light. So there’s our map – know the truah, know joy, walk in light. I don’t know about you, but I think that sounds very nice and very vague. What exactly is the truah that we are called upon to know today, and how does it lead to joyously walking in holy radiance?

The verse right before it gives us more of a picture of what is contained in the call of that truah. It reads Tzedek u’mishpat mechon kise’cha, chesed ve’emet yikadmu fanecha – Justice and righteousness are the foundation of Your throne; chesed – steadfast love or loving kindness, and emet – truth rise up before You. The writer of the psalm, a mystic and poet, is painting a vision for us of Divine reality. Despite what we see in this world of corruption, inequity, lies, and flat-out cruelty, the ultimate truth of the universe is that at its center sits justice. Expressing a similar vision 50 years ago, Dr. Martin Luther King, Jr. paraphrased Unitarian minister Theodore Parker and said, “The arc of the moral universe is long, but it bends toward justice.”

So the imagination of the psalmist sees God sitting on a throne made of justice, righteous, and fair judgment. And the qualities of both firm unwavering truth and expansive unwavering love rise up before the Holy One. In other words, wherever you encounter honesty, justice, acts of generosity, wherever you encounter loving kindness and fair judgment – that is what we mean when we talk about God, that is Divine reality, alive and unfolding right here on earth.

The call of the truah, its wail and waking cry, calls out from that clear and strong seat, from that moral center. Ashrei ha’am yod’ei tru’ah – Happy are the people who know the call to justice and love and truth. Happy is the nation who can hear that vision calling, even from within the mess and brokenness of this material, human world.

It’s interesting. The verse doesn’t say ‘happy are those who hear the tru’ah’ but happy are those who know it. Yod’ei truah. Even though the mitzvah on Rosh Hashanah is to hear the shofar, there is something different, something more, that goes beyond what our ears hear and takes that listening experience into knowing.

You’ve heard the expression “to know someone in the biblical sense” – ‘And Abraham knew Sarah’ – wink, wink. When the word yada, to know, appears in the Torah, one of its meanings is sex. It is used to refer to intimate knowledge of another person. So when it appears in relation to another kind of object of knowledge, like knowing the truah, we understand that it’s not just information we are talking about. With the internet, tweeting, and video cameras on cell phones, today we have unprecedented access to information about atrocities and suffering going on throughout the world.

Just hearing the factual information will not get us far enough. Yod’ei truah – knowing the truah is a kind of knowing that is intimate, vulnerable, and it needs your heart and mind and soul.

So the only way to hear and intimately know the call to justice is to really hear, and to intimately know, the cries of injustice. It means opening our ears to the cries from Syria and the thousands of refugees who are fleeing for their lives right now. It means not letting ourselves forget the tragic deaths in Bangladesh and the economy of cheap clothes that keeps those factories running. It means reading the newspaper in a way that tries to meet the human face of injustice and let it break our hearts, break us open, and fill us with rage and an ache that human beings do this to one another. That we do this to one another. And there are new injustices every day. This is the world we live in.

Out of a confrontation with this darkness, the Talmud records a debate (Eruvin 13b).

The question is asked: which is ultimately better, that human beings have been created or would it have been better had human beings never been created? The optimistic school of Hillel argues it is ultimately better that human beings exist, and the stern and pessimistic school of Shammai asserts that with all the injustice there is in the world, it would have been better had the Creator just not bothered. For two years, these schools argued until, finally, one side is won over to the perspective of the other. Which one do you think wins? Perhaps, to our surprise, Hillel comes to agree with Shammai. Yes. It would have been better had human beings not been created. There is too much suffering; people undergo too much pain in their lifetimes. And free will is an utter disaster because over and over, people choose harm and selfishness and greed and hatred. It would have been better had the whole project been aborted before a single human heart ever began to beat. Hillel throws in an addendum saying, “Since we’ve been created, we are obligated to live and to follow mitzvoth”. That is to say the whole project was a terrible and tragic idea but since we are here, we are here to embrace life, to choose life, and act with purpose and goodness. But we hear the bitterness lingering in his words.

But to be yod’ei truah is a difficult and weighty mission. When we move into this terrain of opening ourselves to know injustice, we run the risk of getting stuck here, of becoming utterly heartbroken, paralyzed, hopeless, jaded. But the verse in psalms that we started with states those who know the truah are happy. If knowing the truah means coming face-to-face with this kind of crisis of meaning, how on earth do we find the joy? How can we imagine walking in light?

According to the Hutner Rebbe, a 20th Century scholar and Hasidic teacher, this is the contradiction and depth of Rosh Hashana. Today we celebrate the birthday of the world. We celebrate the creation of humanity, and the exceeding holiness of this day is the very holiness of human existence. So today we embrace two contradictory and profound truths about human beings, and about being human. Those truths are reflected in the two candles we light to mark the beginning of Rosh Hashana.

“One flame,” says the Hutner Rebbe, “is the flame of ‘it would have been better had humanity not been created’.” This flame is for the experiential ache that cries out in despair and injustice and grief. This first flame holds the sense that there are not enough tears to express the catastrophe of human existence and free will. We light that first candle and recognize there aren’t enough tears to shed for teenagers gunned down in their own neighbourhoods, for rape used as a weapon of war, for children forced to become soldiers of brutality. There aren’t enough tears.

And then there’s the second candle, right beside it. The Hutner Rebbe says that from within the tragedy of that first flame is lit the second candle, the higher, brighter flame of “ve’hinei tov me’od” – Look, it is very good. That’s the phrase in the Book of Genesis that God says after creating the first human being. Hinei tov me’od. For all other creations, God says, “Ki tov” – It is good. The trees and birds and sun and moon, these are all good. But for human beings, “Ve’hinei” – Look. Show up and notice. Tov me’od. It is very good. Only for human beings, who have the unique gift of a conscience and the unique capacity to make moral choices, does the God of the Torah declare that this creation, this addition to the world, is very good. Because over and over, human beings choose generosity and bravery and empathy and love. Free will is a catastrophe and free will is salvation. These two flames burn together because it is only after we recognize the disaster and devastation that free choice can yield, only then can we know the dignity, the liberation, and the enlivening, enlightening joy that free choice, moral choice, can create because that’s when we know, intimately know, how precious life is. Because we know how much power is in our hands to impact others, for harm or for profound good. Because our eyes are open and our hearts are tender, so we know that injustice anywhere diminishes us all, and justice enacted anywhere ennobles us all. The flame of tov me’od burns more brightly because it shines with vision.

Fifty years ago, Martin Luther King, Jr.’s ‘I have a dream’ speech shaped a strong and clear vision of racial justice and human potential. That vision isn’t entirely fulfilled yet, but its radiance has lit the way for social transformation, and it continues to light the way forward. In Jewish mythic time, five thousand seven hundred and seventy-four (5774) years ago today the world was born with a vision of the Holy One on a throne of justice and righteous action, unwavering truth and unwavering love, and with a vision of humanity in the Eden of tov me’od, great goodness.

Those with vision don’t let the limits of current reality shape their insistence on what reality can become. If we want an antidote to paralysis and hopelessness, we need to boldly face injustice and we need an even bolder vision at the center of reality that we aim our lives toward. This is where sparks of joy ignite. Every small victory of goodness, and every brave act toward justice, is a source of joy. Ashrei ha’am yod’ei truah – Happy are those who know the truah calling them to embody that highest sacred vision of what human beings are actually here for. Justice, righteous action, love, and truth. This vision is not fulfilled yet, but today we draw in its radiance to fill us for the year ahead and we start walking, together, in its light.

Messages from the Rabbi